Navasota Junior High School Participates in Kick-Start-For-Kids
Navasota Junior High School has joined dozens of other schools in the state of Texas in participating in Kick-Start-for-Kids, a martial arts training program designed to teach kids discipline with positive reinforcement, instill a sense of belonging, teach students to set and reach attainable goals, and establish opportunities for young people to participate in their communities.
More than 140 junior high school students are participating in the Kick-Start-for-Kids classes this year which serves as a physical education credit. Students take the course as part of the regular class schedule with seven classes being offered throughout the day taught by a full-time Kick-Start-for-Kids instructor.
Navasota Junior High School Principal Jim Russell said the program has had a great early impact on student motivation, participation, and behavior in school.
“It’s a more structured environment which helps a lot of our kids stay focused, and that carries over into the classroom,” Russell said. “They also learn the things that
Kick-Start has been promising; self control and respect, the things that martial arts traditionally teach. We’ve seen huge decreases in discipline referrals throughout the school day from the kids that are involved.”
Kick-Start-for-Kids instructor Ben Mendez, who earned his black belt in Karate at the age of 10, is in his fourth year as a Kick-Start instructor having taught for three years at Attucks Middle School in Houston. Mendez said Kick-Start is a progressive program so that students can return each year to continue climbing the belt ranks. Students in the first year of the program will have an opportunity to earn a gold belt and a purple belt. The first belt test for junior high students will be in November, and the first belt ceremony will take place in December. Mendez saw three of his students at Attucks Middle School promoted to the rank of black belt during his three years in that program.
Mendez, who began taking Karate when he was six years old, said the program begins with lessons in discipline, respect, and inner strength in addition to physical education and Karate-specific exercises.
“We’re trying to give them a structured program to know they can accomplish goals they set for themselves,” Mendez said. “It’s a new program so the kids are learning what expect. I’m trying to make the class very entertaining but also they’re getting a work out every day.”
The program facilitates strong relationships among students and between students and adults which has proven to be a positive influence in youth development, leading to better attendance, higher academic achievement, and lower dropout rates.
Superintendent Rory Gesch noticed the excitement in the Kick-Start classroom upon a recent visit.
“The kids are engaged, they’re intense,” Gesch said. “The essence and methodology that goes into teaching Kick-Start impacts these kids in their behavior and how they approach their other classes. That’s an important piece of Kick-Start, especially at the middle school level where so many kids are trying to find direction and a path and a place to fit in.”
Navasota Kick-Start students will have an opportunity to compete against other Kick-Start programs in and around Houston in the spring. Competitions are broken down by age and experience level with top finishers advancing to compete in the Houston city championships and potentially the state championships in Austin. 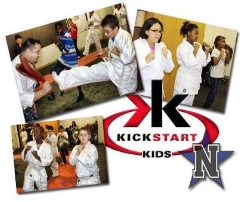