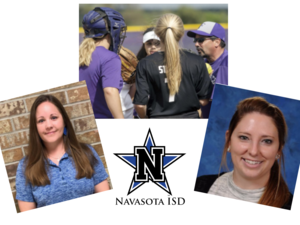 Wednesday, May 26th, 2021
Navasota High School and the Lady Rattler Softball program have announced the hiring of two highly touted coaches to their staff.
Head Coach -
Coach Doug Harrigan has been named the new Head Softball Coach of the Lady Rattlers. Coach Harrigan brings over 17 years of head coaching experience from the 3A level to the 5A level. Coach Harrigan’s experience of 24 total years of coaching also includes 3 years as an Assistant Coach at nearby 5A Magnolia West High School from 2014-2017.
Along with coaching, Mr. Harrigan also brings 24 years of teaching experience in the Social Studies classroom with certifications in Composite Social Studies, History, as well as Physical Education.
As a member of the Texas Girls Coaching Association, Coach Harrigan has also been invited by the TGCA to be a speaker at their annual state coaches conference and summer clinic.
Coach Harrigan’s recent playoff success includes: 2012 Regional Semi-Finalist, 2015 State Tournament appearance and state semi-finalist, 2016 Regional Finalist, 2017 Regional Finalist, 2018 Bi-District Finalist, 2019 Bi-District Champions & Area Finalist.
Coach Harrigan’s philosophy of coaching includes the importance of developing young players from the little league programs up through the high school JV and Varsity levels. Coach Harrigan has instilled a selfless work ethic in his student-athletes that includes community service projects and the ideal of putting others first. He has a passion for teaching the game of softball, developing positive relationships with his team and his staff, and enjoys making those connections that last a lifetime.
When he shared the news of the job offer with his wife and the opportunity to be the new Head Coach at Navasota High School, her response was, “What are you waiting for? Let’s go!” Coach Harrigan quickly called back and said, “We’re all in!”
-----
Assistant Coach -
Navasota High School and the Lady Rattlers are proud to announce the return of Coach Lisa Marek to the softball program. Coach Marek was previously the Head Coach of the Lady Rattlers from 2009 through 2016.
Coach Marek took a brief hiatus from teaching and coaching before returning to Navasota ISD in 2019. She currently serves as a teacher at the NELC and Bizzell Academy and has her teaching certifications in both Special Education and Physical Education. Coach Marek has a total of 11 years of teaching and coaching experience with 7 years of head coaching experience in softball. She also currently serves as the Head Cross Country Coach and Assistant Soccer Coach for Navasota High School.
Coach Marek’s true knowledge and passion lies in softball and is excited about returning to the diamond and helping the student-athletes and the Lady Rattler Softball program take its next steps forward. The rekindled spark, excitement, and knowledge that Coach Marek brings to the game, to the team, and to the staff is a great addition.
Coach Marek is a Navasota High School alumni where she played softball for the Lady Rattlers. She later played at the collegiate level when she played for Northeast Texas from 2002-2004. After that, Lisa played Division 1 collegiate softball for Sam Houston State University as a middle infielder from 2004-2006. There, she received her Bachelor of Science Degree while also making the Dean’s List and becoming an Academic All-Conference member of the Southland Conference.
-----
Assistant Coach -
Current Assistant Softball Coach, Kaycee (Fowler) Gates, rounds out the Lady Rattler staff. Coach Gates is a former softball player and pitching standout at both Mid-American University and Midwestern State University in Wichita Falls.
At Perrin High School, she was a First Team All-District pitcher for all four years and was the District MVP for 3 straight years as a sophomore, junior, and senior. At the collegiate level, Kaycee was a pitcher, shortstop, and outfielder.
Coach Gates has 5 years of teaching and coaching experience and has been at Navasota ISD for four years since 2017. She currently serves as an English teacher at Navasota High School and has teaching certifications in English Language Arts, English as a Second Language (ESL), and an All Level EC-12 Reading Specialist. After her Bachelor’s Degree, Coach Gates completed her Master’s Degree in Curriculum and Instruction from the University of Arlington.
Prior to coming to Navasota High School, Coach Gates served as the Assistant Softball Coach at Hubbard High School under Texas softball coaching icon, Coach Mike Saucke, who has compiled over 550 wins as a Head Softball Coach.
-----
Coach Casey Dacus, the Athletic Director for Navasota ISD, stated “It’s an exciting day for Rattler Athletics and our Lady Rattler Softball program! We feel like we are putting together a really good, high quality staff and we are excited for the future of our program and taking that next step from good to great!”